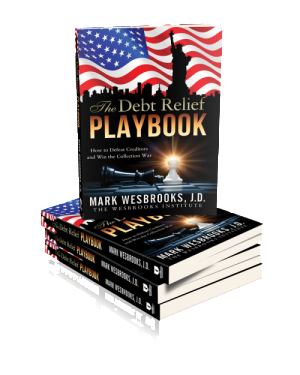 You can find The Debt Relief Playbook at:

Subtitle: How to defeat creditors and win the collection war.

Author, Lawyer, Bankruptcy and Debt Negotiation professional Mark Wesbrooks has released a new book on how to deal with your creditors and what it takes to get out from underneath your debt. This isn’t a book that takes a skilled reader to get through, but instead Mark uses his expertise, writes in laymen terms and with working over 10,000 bankruptcy cases he knows a thing or two about creditors. Throughout Mr. Wesbrooks book “The Debt Relief Playbook – How to defeat creditors and win the collection of war”, he explains specific examples of how to legally fight back with your creditors.

You have legal power against your aggressive creditors and debt collectors under the Fair Debt Collection Practices Act (FDCPA), the Truth in Lending Act (TILA), Fair Credit Reporting Act (FCRA) and other federal and state laws. Did you know that you as a consumer are entitled to recover money damages against your creditors and collectors for even one violation of the laws? One of the most important things you can do when you find yourself in debt is to be informed and take that information to help you live an easier life. When you go to work, you learn your trade so that you can become a better employee that is able to empower themselves and gain higher wages.

There are many debt relief programs, books and other tools out there that may entice you, but Mr. Wesbrooks can help you learn a new trade with his book “The Debt Relief Playbook – How to defeat creditors and win the collection of war”. Mark explains legal protections, strategies, practical tips and procedures in easy to understand terms. You’ll have a roadmap to financial freedom including sample letters, court documents and legal references (which he calls “The War Chest”).

If this little piece of information about The Debt Relief Playbook does not entice you to purchase Mark Wesbrooks, J.D. new book how about we tell you more about him and his credentials as it pertains to Creditor’s Rights Law, is a sustaining member of the American Bankruptcy Institute, and is licensed to practice in all Courts in both the states of Arizona and Texas.  He is licensed in the United States District Courts, Northern District of Texas and District of Arizona.  Mr. Wesbrooks is also licensed to practice before the United States Supreme Court, Court of Appeals, Ninth as well as the Fifth Circuit Courts.